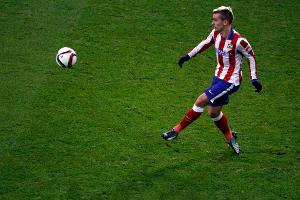 Modern day French international sides have been known for producing flair teams headed by a potent goal scorer but as the country claimed their second ever World Cup in Russia 2018, they had an abundance of talent in their squad. Several men caught the eye but their most important player was undoubtedly Antoine Griezmann.

Born in Macon in France in 1991, the striker has so far spent all of his professional career playing his club football in Spain but, after making his name at Atletico Madrid, the forward left in 2019 for a new challenge at Barcelona. For now, he’s an important part of the Barca and French national set up and as we’ve seen in the past, he’s also the type of player who attracts plenty of enhanced odds promotions from around the sportsbooks.

Griezmann began his youth career in France and was spotted by Spanish side Real Sociedad while playing in a junior tournament. They took him on and offered the player his first professional contract and that’s why the striker has yet to play professionally in his native France.

In 2009 he made his debut for the first team as a substitute while he scored on his first start for Real in a league match against Huesca. Quickly he became a first choice and in five years at the club he enjoyed a healthy if unspectacular scoring record, finishing with 46 goals in 180 league games.

That record was enough for Atletico Madrid who were keen to keep the Frenchman in Spain and in 2014 the club paid a fee that was believed to be close to Griezmann’s buy out clause of 30 million Euros. His first goal for his new side came in the Champions League of 2014/15 and this has proved to be a productive competition for the player over the years.

In his time at Atleti, Griezmann has really blossomed and become one of the world’s best players and he has won a host of individual awards both in Spain and across Europe. However, at the time of writing, his major honours with his team came in the Supercopa De Espana in 2014, the UEFA Super Cup in 2018 and the Europa League in the same year. That’s a respectable tally for most teams but it’s dwarfed by neighbours Real Madrid and that’s why so many rumours have emerged linking the player to clubs that win trophies on a consistent basis.

By the end of the 2017/18 season, Antoine Griezmann had scored 112 goals for Atletico Madrid in 209 games so that’s clearly a record that will attract buyers along with the bookmakers who tailor price boosts next to his name.

It was a return that also attracted a number of interested buyers but few could really afford the kind of transfer fee that Griezmann commanded. Eventually, Barcelona made their move and, in the summer of 2019, they signed the French international on a five year deal for a reported fee of 120 million Euros.

While playing in Spain, Griezmann may have gone under the radar of the French national side as he didn’t receive his first senior call up until early 2014, at the end of his spell with Real Sociedad.

His debut came in March of that year, in a 2-0 win over the Netherlands and while he didn’t hit the target, the player had done enough for manager Didier Deschamps to include the striker in the French squad for the 2014 World Cup.

His first goals duly came in friendly warm ups for the big tournament in Brazil; Griezmann opened his international account against Paraguay in Nice before notching a brace in a big win over Jamaica seven days later. The player drew a blank in the 2014 World Cup but has since progressed to become his country’s first choice striker and a vital part of any side.

In the 2018 tournament in Russia, Antoine Griezmann had scored four goals and at the end of that tournament, he had notched 24 goals in 61 full internationals as he finally proved himself on the biggest stage of all.

He remains an important player for France and will be targeting the Euros now that the tournament has been pushed back to 2021. As 2020 drew to a close, Griezmann’s first 86 games in an international jersey had returned 33 goals.

While we may have profiled more prolific strikers, those are healthy returns and Antoine Griezmann is also known for scoring important goals in games where it really matters. Because of that, the bookmakers are more likely to issue Antoine Griezmann price boosts for the big matches in the Champions League and in the latter stages of the Copa Del Rey as Atletico progress.

That ratio has also dipped during his brief time at Barcelona but Griezmann is now playing behind the incomparable Messi. The Frenchman will, however, undoubtedly continue to contribute important as the seasons develop.

Of course, his importance to the French side also led to a host of enhanced odds offers and promotions for the 2018 World Cup and we should expect to see that continue in the new UEFA Nations League and other major tournaments.

He’s only been with Barcelona since 2019 so we shouldn’t expect Antoine Griezmann to move from the Nou Camp anytime soon. Nothing is ever certain of course and it could be that any Barca player has a price tag if the club doesn’t continue to land major silverware. The pressure is on for the Frenchman to keep on scoring and if his ratio dips, a further sale could never be ruled out.

The fee, if a side were to take him on in the future, would surely reach up to somewhere in the region of 100 million Euros and as we mentioned, while his strike ratio isn’t the most impressive, Griezmann has that happy knack of scoring important goals when it really matters. Barca would surely want to recoup most of that initial outlay of 120 million Euros so it should be expected that, while the player is reaching his 30s, he won’t be part of a cheap sale in future years.

The future is very much in the balance but wherever he plays, Antoine Griezmann will always be a target for enhanced odds and offers and we will let you know about the best of these as they are published.