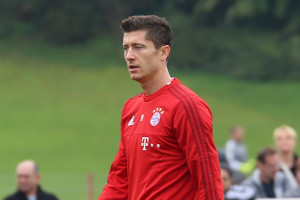 Poland have been seen as one of the Dark Horses for major football tournaments over the past few seasons and that’s partly down to the fact that their squad contains one of the most potent strikers in Europe right now.

Robert Lewandowski is one of the most prolific strikers that we’ve profiled so far and a man who has averaged over a goal every other game in international football for Poland. Lewandowski would also be the recipient of a number of enhanced odds offers from around the sportsbooks so let’s take a look at his career and assess the types of deals that we’re likely to see.

Born in Warsaw in 1988, Lewandowski played for a number of junior teams in his native city before eventually signing professional terms for Polish third division side Znicz Pruszkow. From 2006 to 2008, the striker made a name for himself in the lower tiers, scoring 37 goals in 63 games in all competitions.

The bigger clubs in Poland began to take notice and Lewandowski signed for Lech Poznan in 2008. Once again, he would spend just two seasons with a side averaging exactly a goal every other game from 82 matches in his time there.

At this stage, the bigger clubs around Europe had started to take interest and his next destination was Germany, putting pen to paper with Borussia Dortmund at the start of the 2010/11 season. For the first time in his career, the Pole found goals hard to come by and at the end of that first campaign in the Bundesliga, Lewandowski had managed just nine in 43 games.

Things improved dramatically in 2011/12 with that tally rising to 30 in 47 and it was a ratio that he was to maintain for the next three years in Dortmund. Inevitably, the bigger clubs came calling once again and while he remained in Germany, Lewandowski was to make a clear step up, signing with the mighty Bayern Munich at the start of the 2014/15 campaign.

In his first year at Bayern, he helped win team honours with a tally of 25 goals in 49 games across all competitions. He has continued to maintain a similar ratio as he nears the end of his fourth season in Munich and as just prior to the 2018 World Cup in Russia, Lewandowski went passed 150 goals for his current employers.

Robert Lewandowski made three appearances for the Polish under 21 side in 2008 but was clearly a prolific enough player at that stage to make the step up. In the same year therefore, he made his debut for the full international team against San Marino and he scored in a 2-0 win after coming on as substitute.

By Euro 2012 he was firmly established in the Polish starting XI and scored the first goal of that tournament against Greece. Four years later, he scored the most goals in Euro 2016 qualifying with a total of 13, equalling the record set by Northern Ireland’s David Healy in 2008.

In eight years as a full international, Lewandowski had scored 55 goals in 98 matches, up to and including Russia 2018. That’s an impressive record when you consider that while Poland have a competent team, they are not quite the dominant force in world football.

That’s a seriously good return and the reason why we described Robert Lewandowski as one of the most prolific strikers that we’ve previewed. Bayern Munich have dominated the domestic scene in Germany with four straight Bundesliga titles up to 2017/18 and they seem certain to add to that tally.

Bayern will also go deep into most editions of the Champions League so as far as Robert Lewandowski price boosts are concerned, the majority of these will focus on the UCL. And, we should expect plenty of enhanced odds offers when the striker appears for Poland at major international tournaments.

Lewandowski reached the age of 30 in 2018 and rumours suggest he may look for one last challenge around Europe. Of course, he is already playing at one of the biggest clubs in the world but that hasn’t stopped stories emerging of a transfer to England, possibly to Chelsea or Manchester United.

The majority of price boost offers from around the sportsbooks tend to focus on English games so they would naturally intensify if that were to happen. The future is unknown of course but as a player who has already played for four professional clubs in his career, another switch is perfectly possible before he finally decides to hang up his boots.