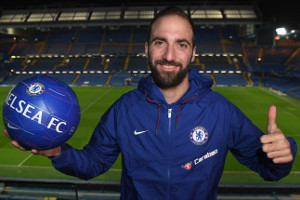 Having just completed a long-awaited loan deal from Juventus to Chelsea, much is expected of Gonzalo Higuain for the second half of the 2018/19 Premier League season. The Argentine International has been a prolific scorer for much of his career but started to lose out at Juve when Cristiano Ronaldo arrived at the club.

He now has a fresh start and as Higuain looks to rebuild his career at Stamford Bridge, the bookmakers will be following him too. We can expect a number of enhanced odds offers and Gonzalo Higuain price boosts so, in order to decide whether to take full advantage of those, let’s look back on his career to date.

Higuain was actually born in France but began his playing career as a teenager with River Plate. In two years in the Argentine top division, his scoring record was a relatively modest one but Real Madrid had clearly seen something special in the striker. Higuain made the switch to the Bernabeu in 2007 and from there, his career really started to take off.

At River Plate, the forward’s scoring ratio was around one goal every three games but all that was set to change. He spent six years at Real, averaging more than a goal every two matches in La Liga before finishing with an overall record of 121 goals in 264 games across all competitions.

With Gareth Bale, Cristiano Ronaldo and Karim Benzema at the club, opportunities became limited and in 2013, Gonzalo Higuain left to join up with Napoli. In a division which is known for its defensive approach, the Argentine’s scoring record actually improved over three seasons in Naples. From 2013 through to the end of the 2015/16 campaign, Higuain returned a total of 91 goals in 146 games in all Italian domestic competitions.

He was settled in Italy and it was inevitable that bigger clubs would come calling and, at the start of the 2016/17 season, Higuain was snapped up by Juventus for a record transfer fee of 90 million Euros. The Argentine quickly began to repay that fee with 32 goals in his first season and although the following campaign was less prolific, the player remained an important figure in Juve’s domestic success.

It all changed after the 2018 World Cup in Russia when Juventus stunned the world by bringing Cristiano Ronaldo to the club. The Portuguese became the focal point up front and Gonzalo Higuain was deemed surplus to requirements. He was initially loaned out to AC Milan at the start of 2018/19 but after a subdued period at the San Siro, Higuain now finds himself at Chelsea in the next chapter of his career.

Gonzalo Higuain could have played international football for his country of birth but he eventually overlooked France in favour of a career with Argentina. He played at the 2008 Olympic Games in Beijing and finally, the striker made his debut for the full international side against Peru in October 2009. Higuain scored in this game and that started a productive period in Argentine colours.

A productive campaign in qualifying for the 2014 World Cup was followed by his most important strike in the national side. Higuain scored the only goal of the game as Argentina beat Belgium in the quarter final in Brazil. Unfortunately, he couldn’t register in the final as his country went down to Germany.

A productive few years followed but his form dipped as Argentina began their campaign for the 2018 World Cup. During qualifying, he managed just one goal in nine games and failed to register a strike during a poor tournament for his country in Russia. His future at this level seems a little uncertain but surely Argentina will persevere with a striker of his quality.

As of January 2019, Gonzalo Higuain had registered 31 goals in 75 full internationals for his country so, whenever a World Cup or major international tournament comes along, we may see more enhanced odds offers attached to his name.

That record shows that Higuain’s best returns tend to come in domestic league football so that’s where we might see enhanced odds and price boost deals drop in. Big European matches attract the most interest however so we certainly shouldn’t rule those out.

At the start of the 2018/19 campaign, the striker was loaned out to AC Milan where he scored eight goals in 22 matches. It’s a respectable record and one that he will hope to build on during his time at Chelsea.

In January 2019, Gonzalo Higuain signed a loan deal with Chelsea that would take him to the end of the 2018/19 football season, That doesn’t suggest a particularly stable future but it’s possible that the Argentine may well find a more long-term home at Stamford Bridge.

Higuain reunites with current Chelsea boss Maurizio Sarri who was in charge of Napoli when the player first made the switch to Serie A. He made a good impression in Naples and if he can prove to be prolific in the English Premier League, the West London club may well consider a permanent transfer from Juventus.

That’s all in the future but for now, the Argentinian centre forward has a point to prove in the EPL and he will attract plenty of interest from the bookmakers. We will, in turn, look to bring you the best Gonzalo Higuain enhanced odds offer and price boosts as they land so keep checking back for further updates.