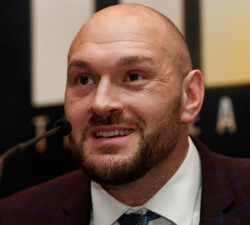 While he may have had his issues away from the ring, Tyson Fury remains one of the most successful British boxers of the modern era and, he has yet to be defeated in his professional career. He was a former unified World heavyweight champion and following a spell away from the ring, Fury is back and will soon be fighting for world titles once again.

When he was at his peak, there was huge interest in Tyson Fury betting odds from across the sportsbooks and they will undoubtedly return as he continues his comeback. In amongst the regular Tyson Fury betting markets are offers, promotions, price boosts and enhanced odds deals so what do we know about this fighter and what can we look forward to from the sportsbooks moving forward?

Although you wouldn’t necessarily want to say it to his face, it’s probably fair to suggest that Tyson Fury’s amateur career was a fairly unremarkable one. He never competed at an Olympics as there were issues over qualification for Ireland – the country of his father’s birth and the one that he preferred to represent.

As the boxer went under the radar at this time, there wouldn’t have been any Tyson Fury bets available as the bookmakers were largely unaware of his presence. At the time Fury turned professional in 2008, his amateur career was fairly modest with 31 wins and four defeats but things were to take a dramatic and positive change.

Tyson Fury’s first professional fight came on December 6, 2008 as he took on the Hungarian fighter Bela Gyongyosi. It was a simple run out for the man from Manchester as he came through via a technical knockout decision in the very first round.

The odds on Tyson Fury to win would have been short enough for that bout but they continued to tighten as he made his way serenely through the early part of his career. Next up came no fewer than six fights in seven months and while that was clearly a tight schedule, Fury won them all.

The boxing fraternity started to take more of an interest in Tyson Fury betting odds but at this point he’d barely been tested. That was to change, however, in 2011 when he came to fight Dereck Chisora for the British and Commonwealth Heavyweight titles.

Both men went into the fight with a 14-0 record but it was the older Chisora who started as the favourite. Fury would go on to win convincingly on points and it became apparent that the heavyweight division had a new star on its hands.

Fury then claimed his first world title when he beat Vinny Maddalone to take the WBO intercontinental heavyweight title. Further victories followed against Steve Cunningham, David Haye and a rematch with Dereck Chisora before Tyson came up against his biggest challenge at that point – the great Wladimir Klitschko.

The fight, in November 2015, was a unified battle with no fewer than six heavyweight belts on the line. Klitschko held them all and his reign of ten years was the longest in the modern era so he started as favourite while the odds on Tyson Fury to win showed him as the clear outsider.

Fury upset those odds with a unanimous points win after 12 rounds in what was one of the greatest ever triumphs for a British boxer.

Successful defences followed but Tyson Fury’s long period of success started to come to an end in unexpected circumstances. Following anti-doping and medical issues, he was forced to take a break from the game before finally returning in May 2018. He’s been a long time out of the ring and is still working his way back to his best but with a professional record of 27 wins from 27 fights, promoters and opponents should still be taking Tyson Fury seriously.

If you’re looking for the odds on Tyson Fury to win any of his forthcoming bouts, keep a look out for price boosts and enhanced odds deals from around the sportsbooks. These can generally work in two distinct ways with some promotions aimed specifically at new account holders while others can be accessed by all customers.

New customer deals tend to follow a similar pattern as they look to take a short win price, often at an odds on figure, and lift it up to something more exciting such as 20/1 and maybe even higher. We saw this in 2018 as Fury made his comeback against the 39 year old Albanian Sefer Seferi. It was a gentle workout and among the Tyson Fury odds Coral and 888Sport looked to provide enhanced deals of this kind.

Ladbrokes, SportNation and Sport Pesa are two more bookmakers who will often issue enhanced promos for any boxing event. The main points to remember, apart from the fact that these are purely for new customers, is that stakes tend to be fixed at £1.00 and the enhanced part of the profit is paid out as free bet tokens.

As an alternative to those deals, other bookmakers take the standard Tyson Fury odds for any market and give them a price boost for all of their customers. The increases can be much smaller here but the good thing is that the terms are more flexible so there’s unlikely to be a maximum stake and all profits should be paid in cash as opposed to free bet tokens.

Bookies who get involved with this type of price boost might include William Hill, Ladbrokes, Winner Sports, SportNation and Betway and players can expect to see a bigger choice of markets available, Therefore, there could be price boosts in the result betting, in the method of victory or, for longer term options, they may arrive in the Tyson Fury next fight odds and the Tyson Fury next opponent odds.

Keep reading our columns as we follow Fury’s next fights while we look to bring you the best promotions, price boosts and Tyson Fury betting odds as he continues his comeback.